Well, today is due to be another hot and humid day and I am walking the first quarter of the Jurassic Coast Ultra Challenge, i.e 24.5k Poole to Corfe Castle.

I joined the competitors at White cliffs, having picked up my bib number, etc the night before. As part of the 9.50 wave we gathered for a final briefing and warm up and then we were off!

The first leg was to the Sandbanks ferry crossing where our timers were halted while we waited for the ferry. A couple of minutes over the water and we made our way to Shell Bay ready to walk along the water’s edge past the nudist beach (eyes down everyone(!) and along to Studland where we followed the paths and road up the hill, diverting off near the top to make our way along the hilltop towards Old Harry Rocks. On top of the hill was a signpost with the 12k marker. Nearly at our rest stop.

We nearly missed the right turn that took us down to Swanage as we were following others who had not noticed the pink arrows and had gone the wrong way. The path led us down to Swanage and our rest stop, where we were timed in.  I must say they provided a good selection of pastries, crisps, flapjack, Haribo sweets, etc and a most welcome cup of tea. A quick 15 minute stop and we were on our way again.

Little did we know how tough the next bit would be – the walk up to the top of the Purbeck hills in the scorching sun.  It seemed neverending! Eventually we reached the top and it was a straight walk along the top to Corfe Castle. The views throughout were amazing and we even passed some cows walking towards us on the path.

By now, we had been walking over six hours and had had enough but we were nearly there. The path took us down to the road that winds round Corfe Castle itself and the finishing point was just beyond Norden station and the park and ride.

Finally we had made it! I made sure we were timed in (but their machine were awry again as I had a text later that evening asking where we were).  I am the kiss of death for technology!

Ironically we had completed it in a similar time to our last walk, although I reckoned we had beaten it by 4 minutes.

We were presented our finisher’s medal and enjoyed a quick drink of fizz in celebration, then we picked our t-shirt and went of to find our baguette meal (mmm… steak and onion) which we ate on the way to catch the shuttle bus to Wareham Station. It’s a short hop down to Poole where we were picked up and taken home for a much needed bath!

Volunteered to help out on Sunday, 15th July at the Cream Tea weekend. Unfortunately it coincided with both the World Cup Final and the Wimbledon Men’s Tennis Final, which we’d normally watch. It also meant it was quieter than normal but we had a delicious selection of homemade scones and cakes to tempt our visitors, along with plant, book and bric-a-brac stalls and a tombola which proved popular.

We managed to find time for a cup of tea and a piece of raspberry and ameretto cake…mmm.  Anyone who follows my adventures will see I do love tea and cake!

A good time was had by all and we raised £536.00 for the local branch of the MND Association – East Dorset and New Forest, who work tirelessly through the the year to raise awareness and funds.

This evening I was delighted to visit the lovely Tivoli Theatre, it was especially nice to spend the evening in their air conditioned auditorium!

It’s not til you see the music performed live that you realise how many instruments are involved in making these songs. This evening we had the musical director/pianist, lead guitarist, bass guitarist, the multi-talented saxophonist/clarinetist/flautist/percussion player (and yes, at times he played more than one at the same time), the oboeist (is that the right word?), a violinist and the drummer. All the musicians also sang vocals as well. Finally, they were fronted by the excellent lead vocalist who really brought Karen Carpenter’s vocal talents to life.

Most of our favourite songs were include – mine were Mr Postman and A Kind of Hush, that album being one of the few I owned back then (an old favourite of mine was Goofus but they can’t play them all).

They encouraged us to join in with the singing but we’re always quite reserved plus I’m hopeless at remembering the words!

Well, the evening sped by and in no time they were singing a final medley. I always loved The Carpenters music and it was a pleasure to see it performed live.  I would definitely see the show again and recommend it for true die hard fans or people who simply enjoy an evening of classic songs played live. It was a treat.

Well the time has come for my first real challenge this year, on the anniversary of my 53k, 3 day Iceland Trek with Isabel, both events being organised by Action Challenge.

After packing our bags and walking poles, we caught the South Western Trains 3.07, which was lovely and cool.  To get to Bath Spa we have to change at Southampton Central for a GWR train – just three carriages and no air conditioning – we were wilting by the time we reached Bath Spa.  It was so hot they had to give out free water.  Apart from that, the journey was uneventful and we arrived in time to pop to Royal Victoria Park to register for the walk and pick up our bib, etc.  We then went to book in to our lovely Airbnb room, which was ideally placed for the start of our event tomorrow but within easy reach of the centre for the rest of the weekend.

We enjoyed a meal at Zizzi’s and had a wander round the centre before getting back to prepare for the next day’s ordeal! 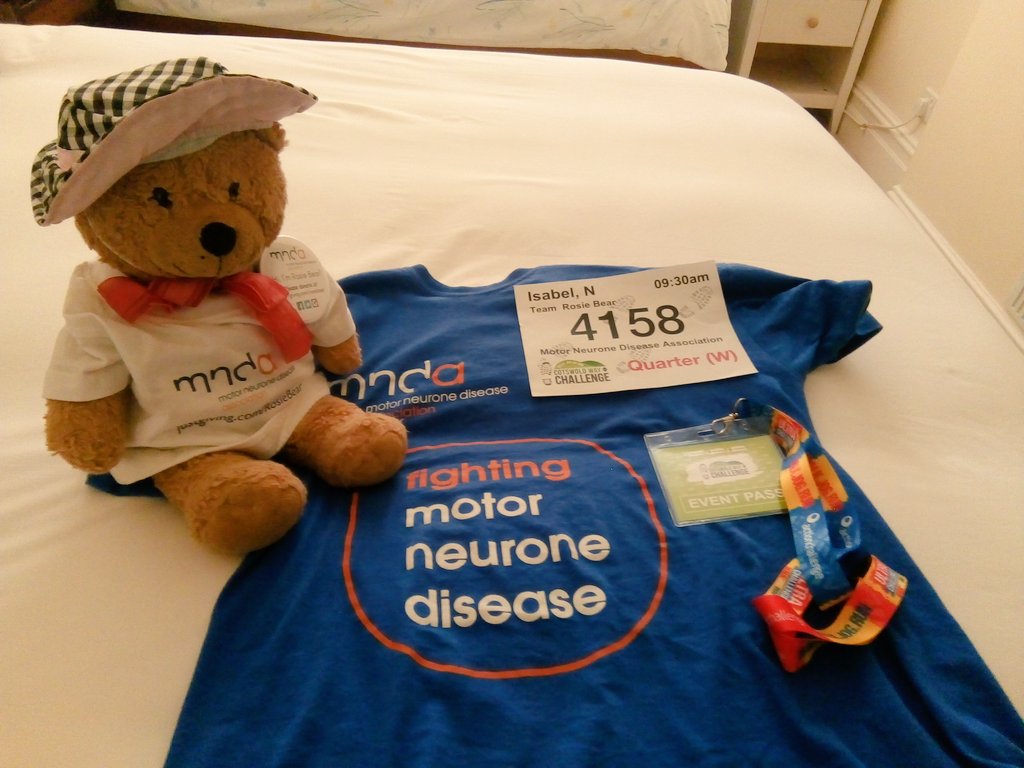 Up early, we had breakfast then made our way the short distance to the start of the Cotswold Way Challenge.  There were lots of participants and we were in the last group to set off.  Allegedly the target time is 4-6 hours but I’m not expecting to be that fast!  After a quick warm up, the hooter went and we were off.  The route initially took us through Royal Victoria Park and up our first hill.  It was hazy at the start but the sun soon began to peek through and it quickly got hotter and hotter.

We knew we’d be going up and down the hills but we also walked along the edge of fields, along pathways, roads and part of  the Racecourse, with a rest stop by the golf course at 9km, where we were logged in.  Here there were much needed tented areas areas to sit down, along with snacks, hot and cold drinks, and support staff for anyone that needed extra help.  After a quick snack of danish pastries, some Haribo and a couple of cups of squash, we started on our way again.

We met some lovely people on the way, some were asking what I was doing in the back pack, so I explained about losing Rosemary to Motor Neurone Disease and that I am raising funds for the local and National MND Associations and awareness of the disease.  Some were interested in our Iceland trip last year and were asking for details as they fancied doing that challenge and a lot said ‘hello bear’ as they passed us slowcoaches!  There were lovely views to the left and right and the rare shady spots were a real treat.

We were always going to be near the back but walking in that heat was something else, especially up the hills in the baking sun.  Still we trudged along, once nearly taking the wrong path, which was daft really because it was well signposted, and eventually the finish line came in to view.  We arrived as it came to 4.30, making it a 7 hour slog!  We logged ourselves in and picked up our winners medal and t-shirt (shame they don’t make a tiny one in my size!) and celebrated with a little drink of fizz.  We then gave in our name card and thankfully took the coach back to the start.  We were relieved to have got to the end in one piece, although I can’t remember why we also volunteered for the Jurassic 25k in a few weeks’ time!

After a shower and a hot sweet tea, we hobbled down to the town centre for a celebratory steak meal and an early night.

Next day we were having a look round the city centre and came across these lovely owls, which are part of the Minerva Owls of Bath 2018 Public Art Sculpture Trail, where a parliament of over 80 brightly decorated owls have been dotted around Bath for people to spot from 25th June to 10 September and to raise funds – plus the large owls will be auctioned for charity in October.  We came across a lovely bright blue owl outside the Thermae Spa and met their very own teddy bear, who was there to welcome us to the spa as we had booked a visit and a massage to help recover from the long walk the day before.

The Thermae Spa is a really lovely place to visit, with a roof top pool giving views over the city and it’s a place where you can truly relax and refresh your senses in the inspiring historic setting.  I must say Isabel needed pampering after her exertions the previous day – I was lucky as she carried me all the way – my paws just chafed a bit on the rucksack! 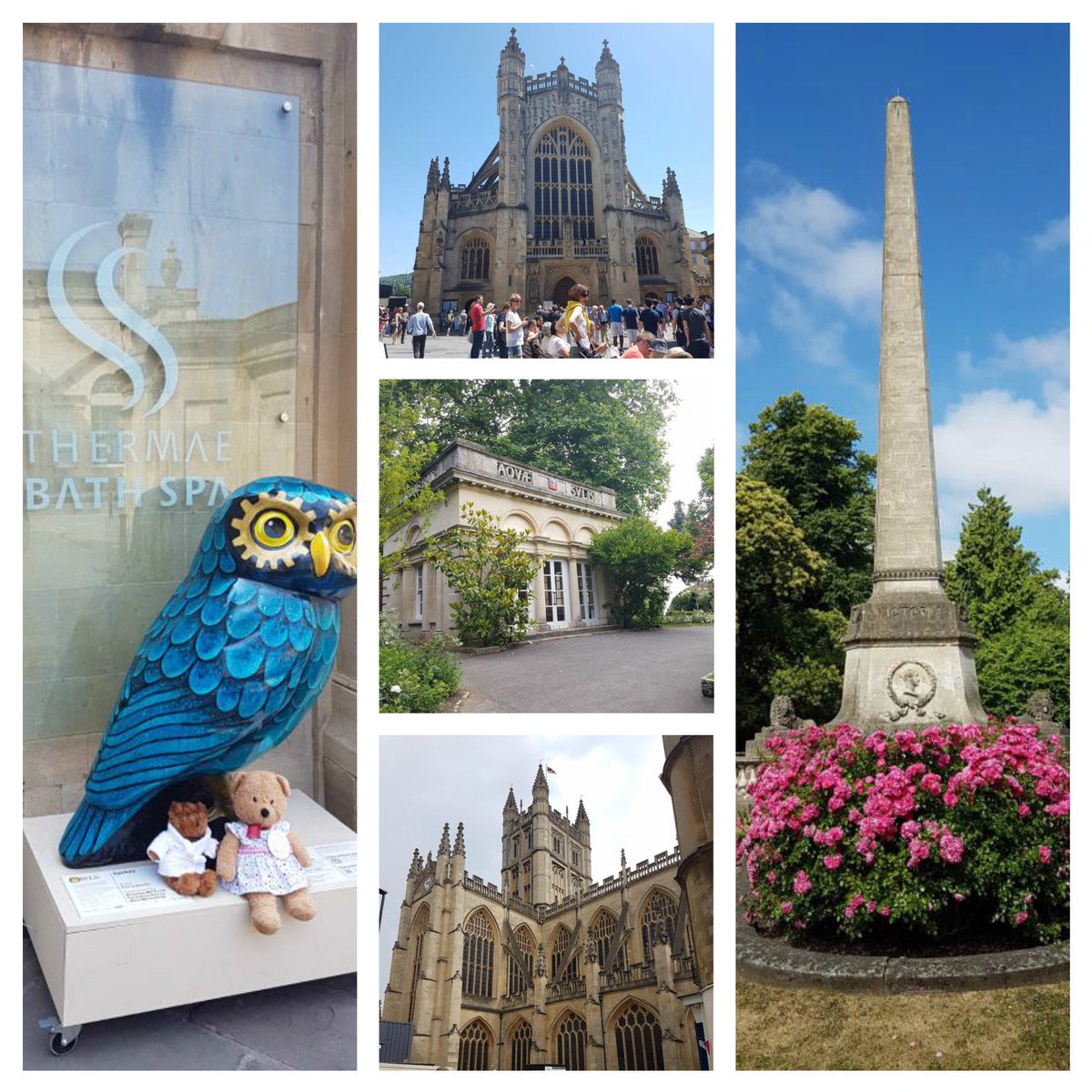 After the spa we had time for a spot of lunch and sightseeing and it was time to catch the train home.  We’d had a lovely weekend and will definitely visit again – it’s a lovely city.  Thank you Bath 🙂