An early start this morning – the 1.30am National Express coach to Terminal 5.  It saves staying in a room overnight, I just have to read my book for a few hours before being able to book in for my British Airways flight to Munich.  I waited to see if I could see a Titan rep but didn’t see one so I made my way through the automated check-in system and security check then had a browse through the shops while waiting for the plane.

After a few hours hanging about we were called to board the plane, it’s only a short flight, less than two hours but I do enjoy having a snack and a drink on board – I can’t resist a treat to start my holiday.  The flight was uneventful but when we landed it took nearly an hour for our bags to appear.  Goodness knows what the delay was – it’s only a small airport!  When we came out of the arrival area we saw our driver holding up a Titan Travel sign.  We later discovered his name was Werner – he didn’t speak much English but he loaded up the luggage, counted us aboard the coach and took us on our two hour journey to our hotel, the Jenbacherhof in the Tyrolean market town of Jenbach.

We booked in to the hotel and made our way to our rooms.  Mine was very nice and quite spacious, although it didn’t have air conditioning and was a bit hot on occasion as we had good weather for a lot of our trip.  My room was also situated above the stream that ran alongside the hotel – I could have done with a mute button as it was quite noisy!

Dinner was at 7.00 pm and we discovered it consisted of soup, followed by a main and a sweet.  After the first night we were given a choice of two main dishes, which I was pleased about, being a picky eater.

Our guide Suzanne appeared that evening and introduced herself and told us the itinerary for the next day.  Days 5 and 2 of the itinerary had to be switched round due to the running times of the trains, but the rest were as advertised.

This railway started in 1898 and runs through the Salzach Valley to the Hohe Tauern National Park, home to Austria’s highest mountain, the Grossglockner, and Europe’s highest waterfalls, the 380m high Krimml Falls. 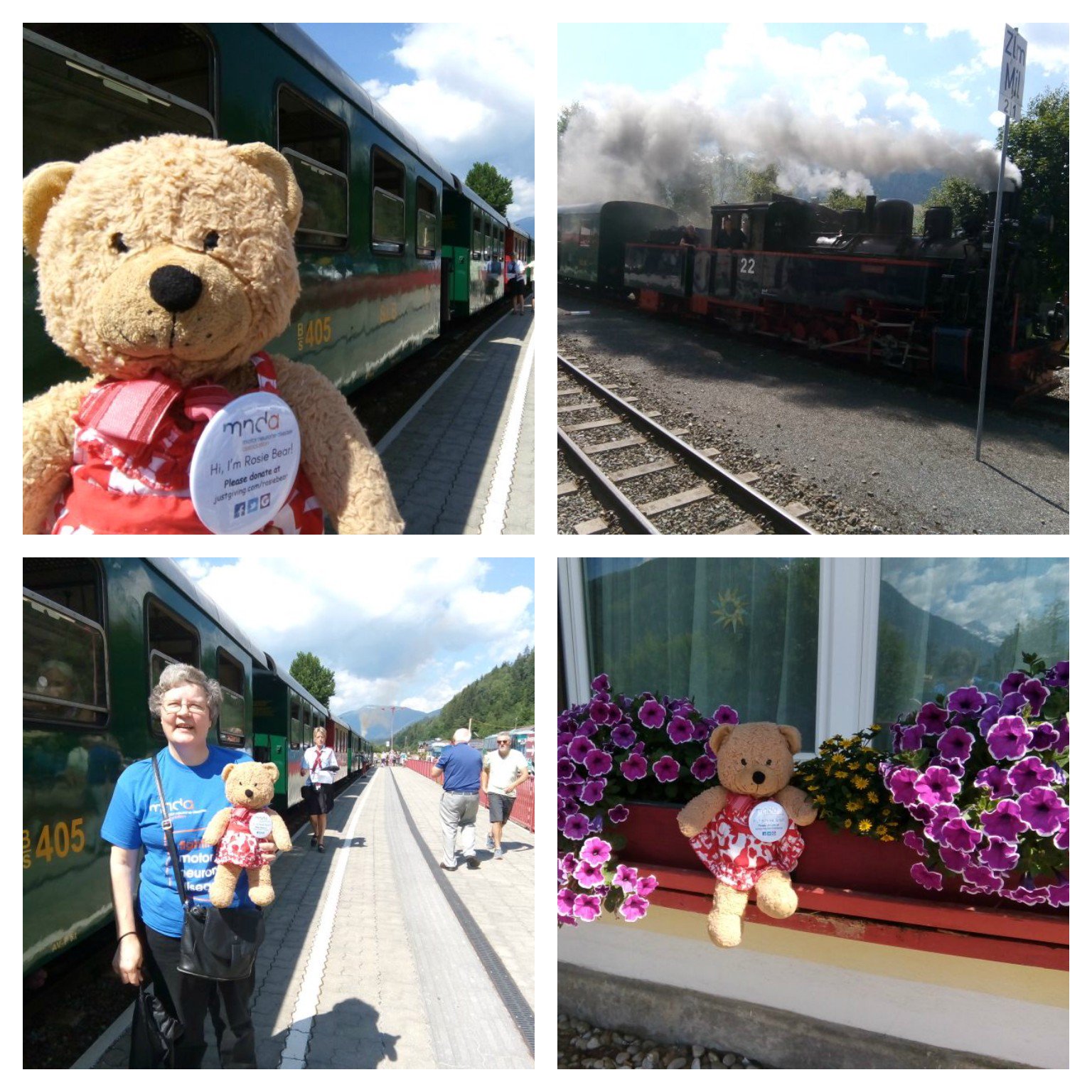 The train went through some lovely countryside, the Tyrol really is a pretty place to visit, then we boarded the coach again and made our way to the Krimml Falls, which are spectacular.  I decided to go to a higher viewing platform to get a good photo but kept going up the zig zag path to the side of the falls and eventually ended up at the cafe at the top!  I rewarded myself with a drink and a snack before going back down again. 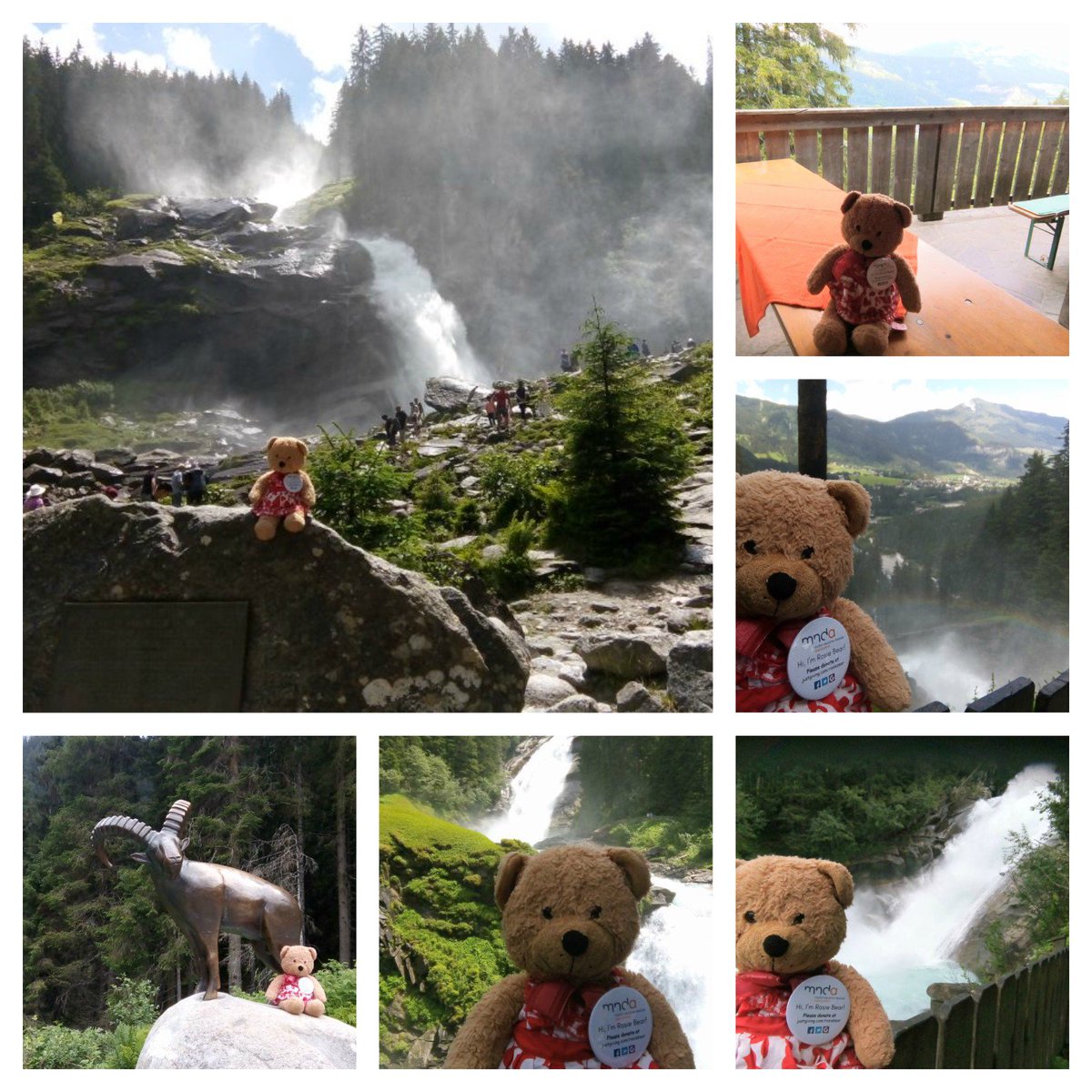 After dinner this evening we were told there was a concert taking place nearby so we went up to have a look.  They all wore the traditional Tyrolean costumes and played folk music and arrangements of well known songs, such as ‘My Way’.  Local girls came round with schnapps in barrels which they were selling to the audience.

We also received a taste of typical mountain weather – it started to bucket down, luckily they are used to it and had umbrellas up just in case.

Today we catch the Zillertal Valley Steam Railway, which has a gauge of just  760mm.  Opened in 1902 it is still a well-used transport link for the locals as well as a popular tourist attraction.

We caught the coach to Fugen then boarded the train for the 22km journey to Mayerhofen, which was very enjoyable as we were given schnapps and treated to some accordion music. 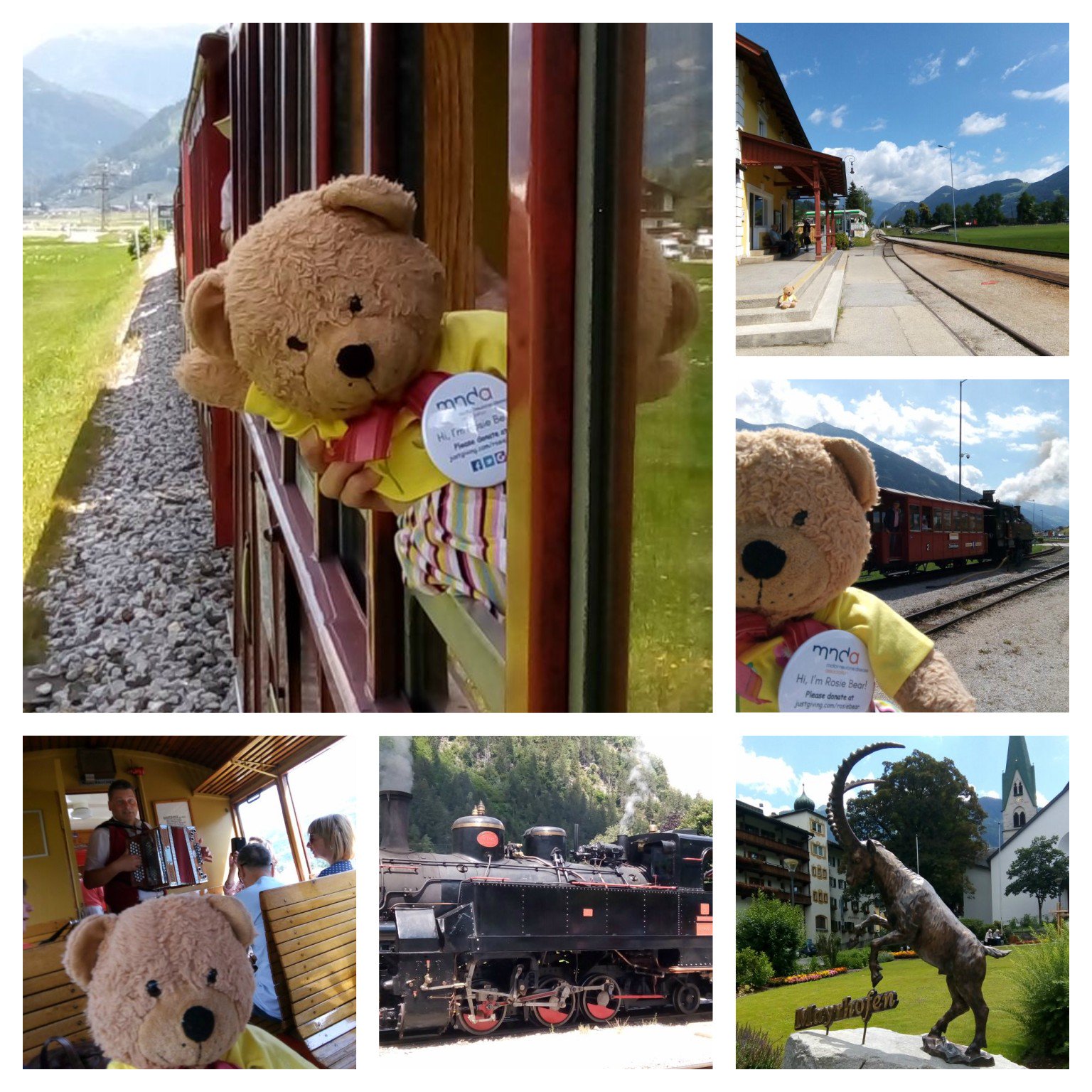 Mayerhofen is a lovely town and we had some free time to have a wander and find some lunch before boarding the coach again for the return trip.  On the way back we called in to Rattenburg, Austria’s smallest town with a population of approx 450 people, where we were also given a demonstation of glass blowingat Kisslinger Krystall and I managed to find a small souvenir candle holder, which I got engraved as a reminder of the trip. 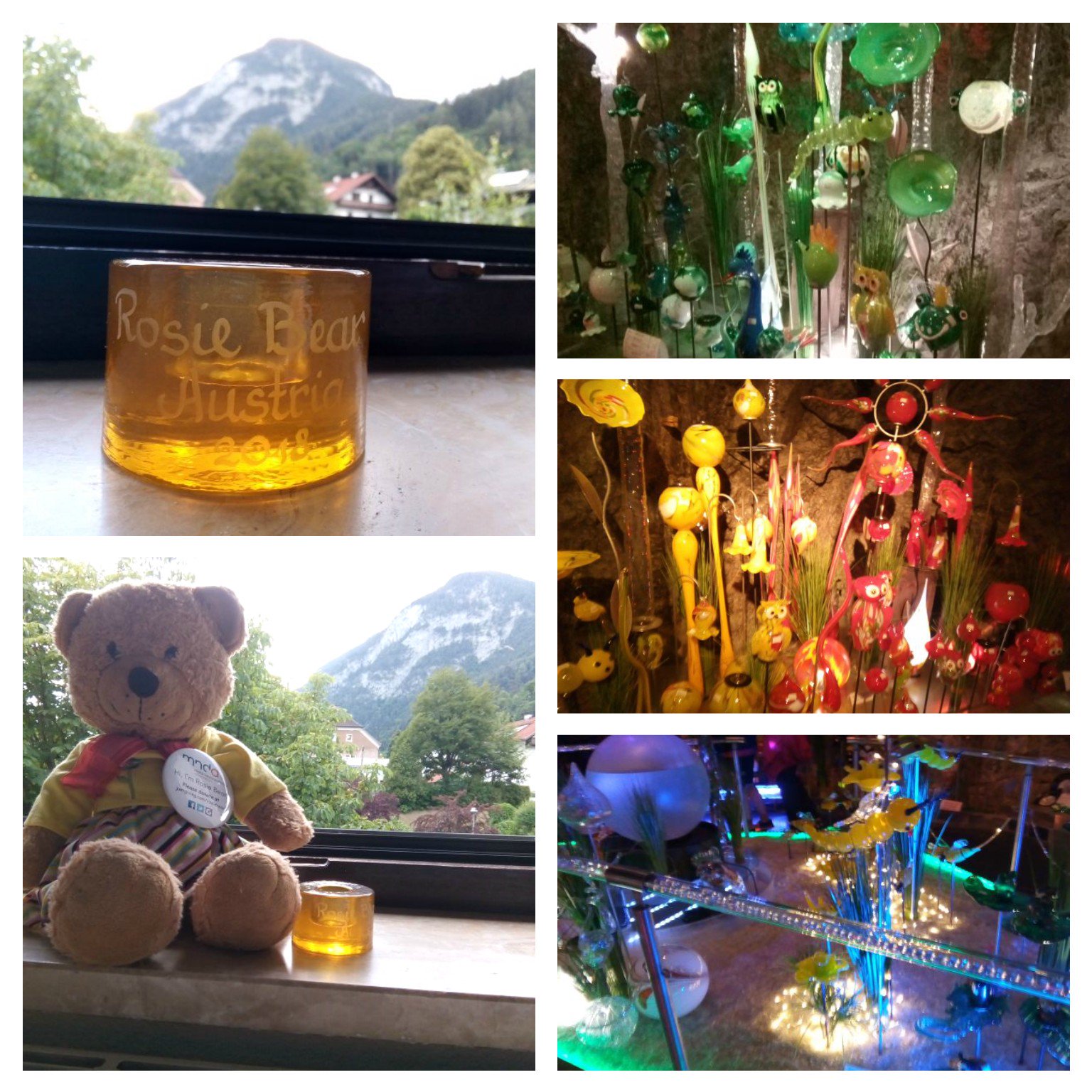 Today required an early morning alarm to make sure we were able to have breakfast before boarding the coach in time to get to Salzburg. At least we were able to have a snooze on the coach on the way.  When we arrived in Salzburg we were given a two hour walking tour by a knowledgeable local guide, which included Mozart’s birthplace (the yellow building below) then given time to wander on our own.  I decided to walk up to the castle that overlooks the city – and what a view it is too! 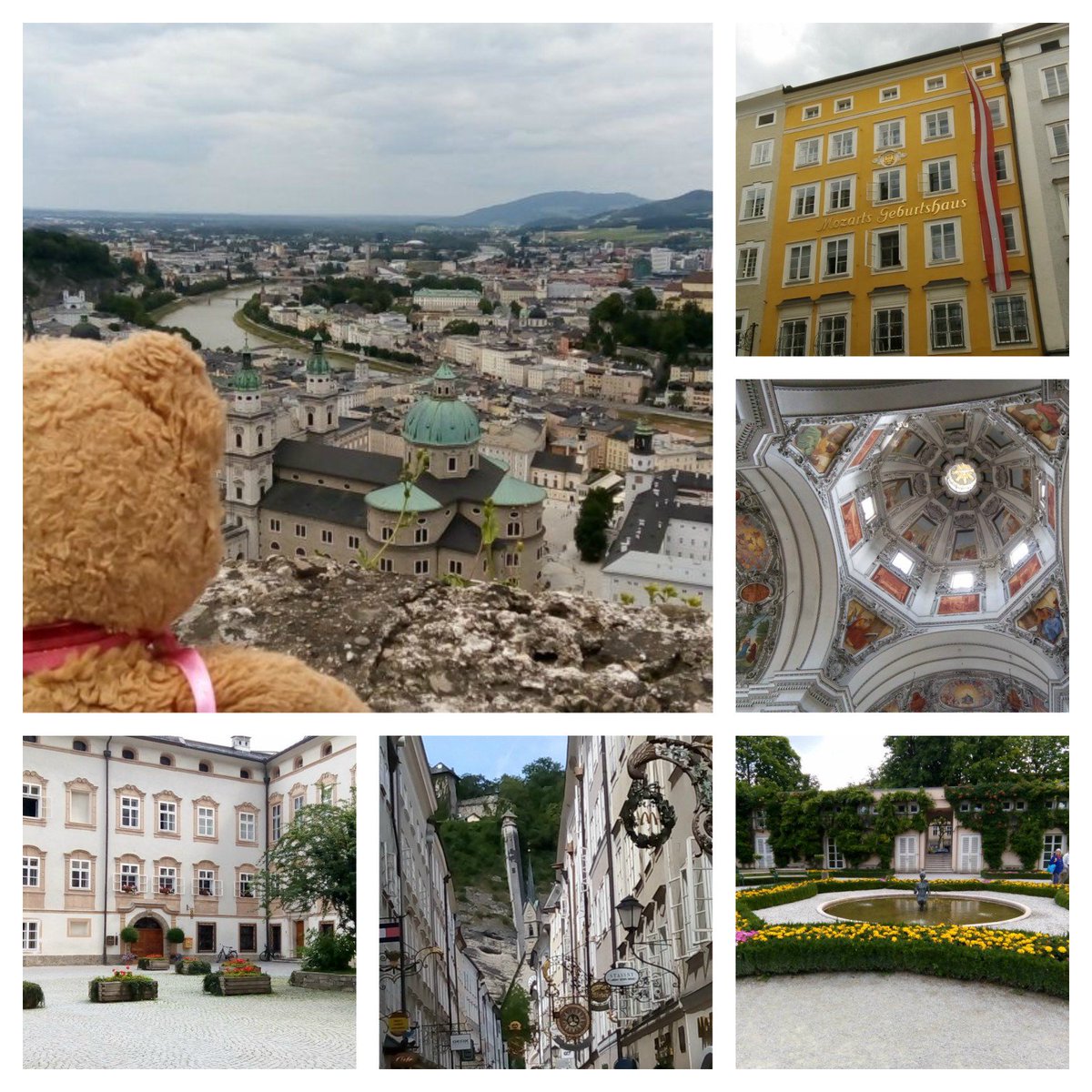 After my hike to the top and back, I was very pleased to stop for a cup of tea and some of the Sachertorte, a cake created by Austrian Franz Sacher in 1832… mmm 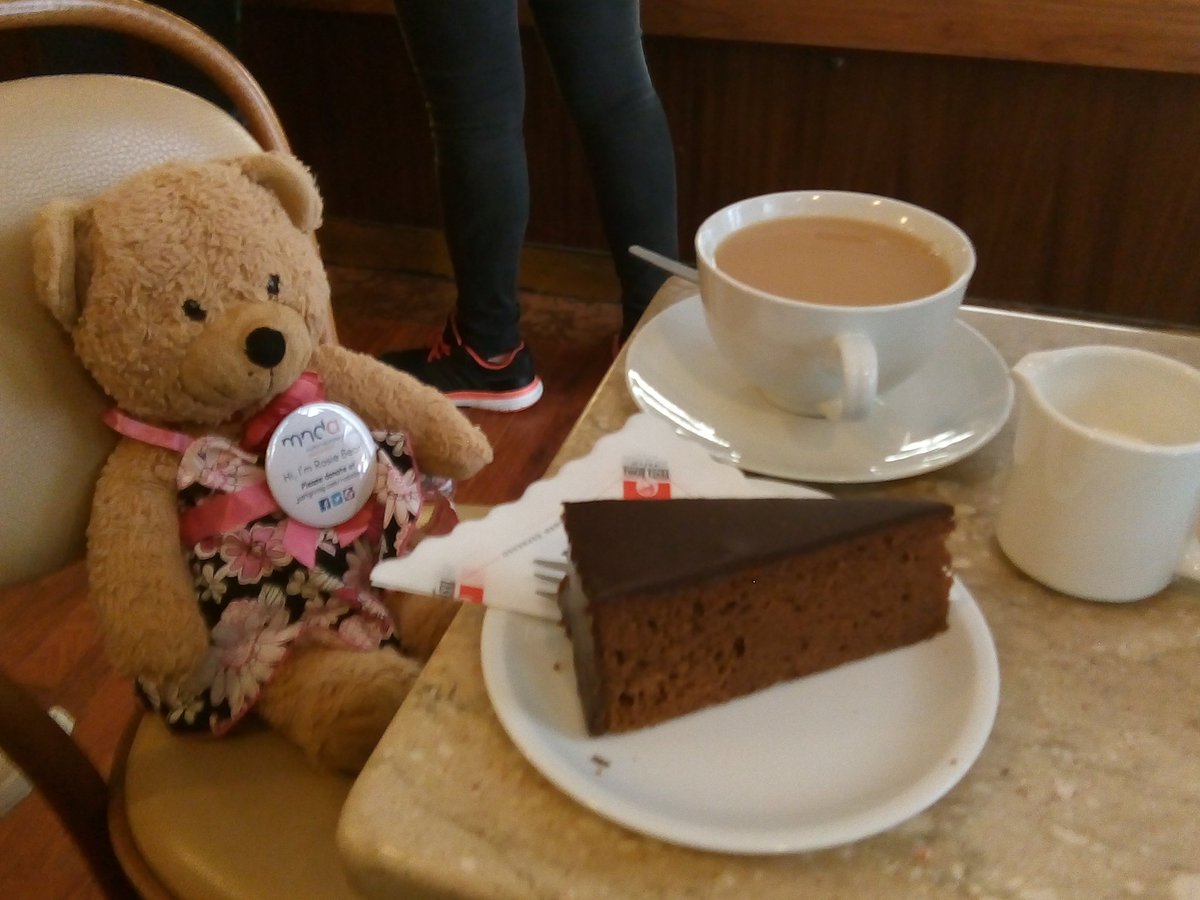 Today we had an extra trip to Tratzberg Castle arranged by Suzanne at the request of one of our tour member and we’re really pleased it was included – it was a really amazing building with exquisite workmanship and lots of treasures inside and a very good automated tour. 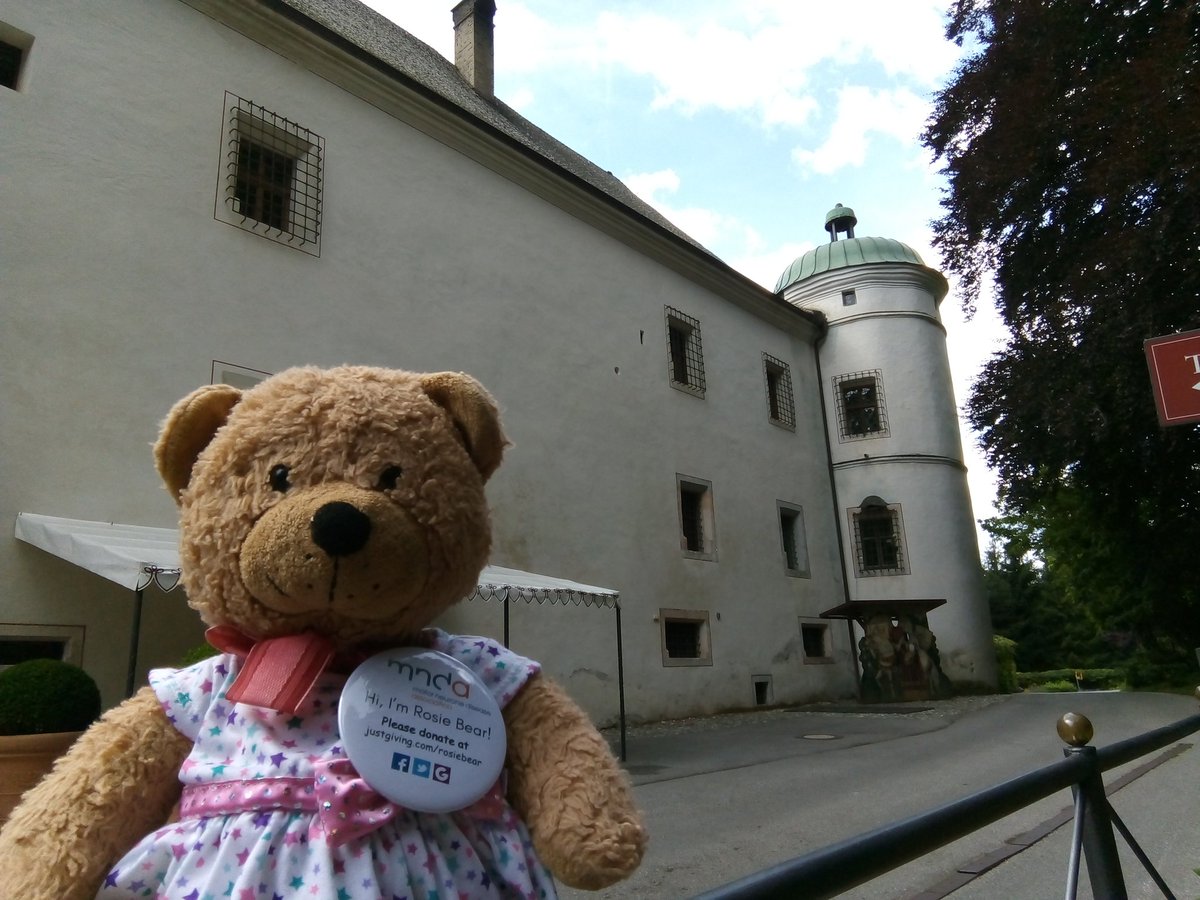 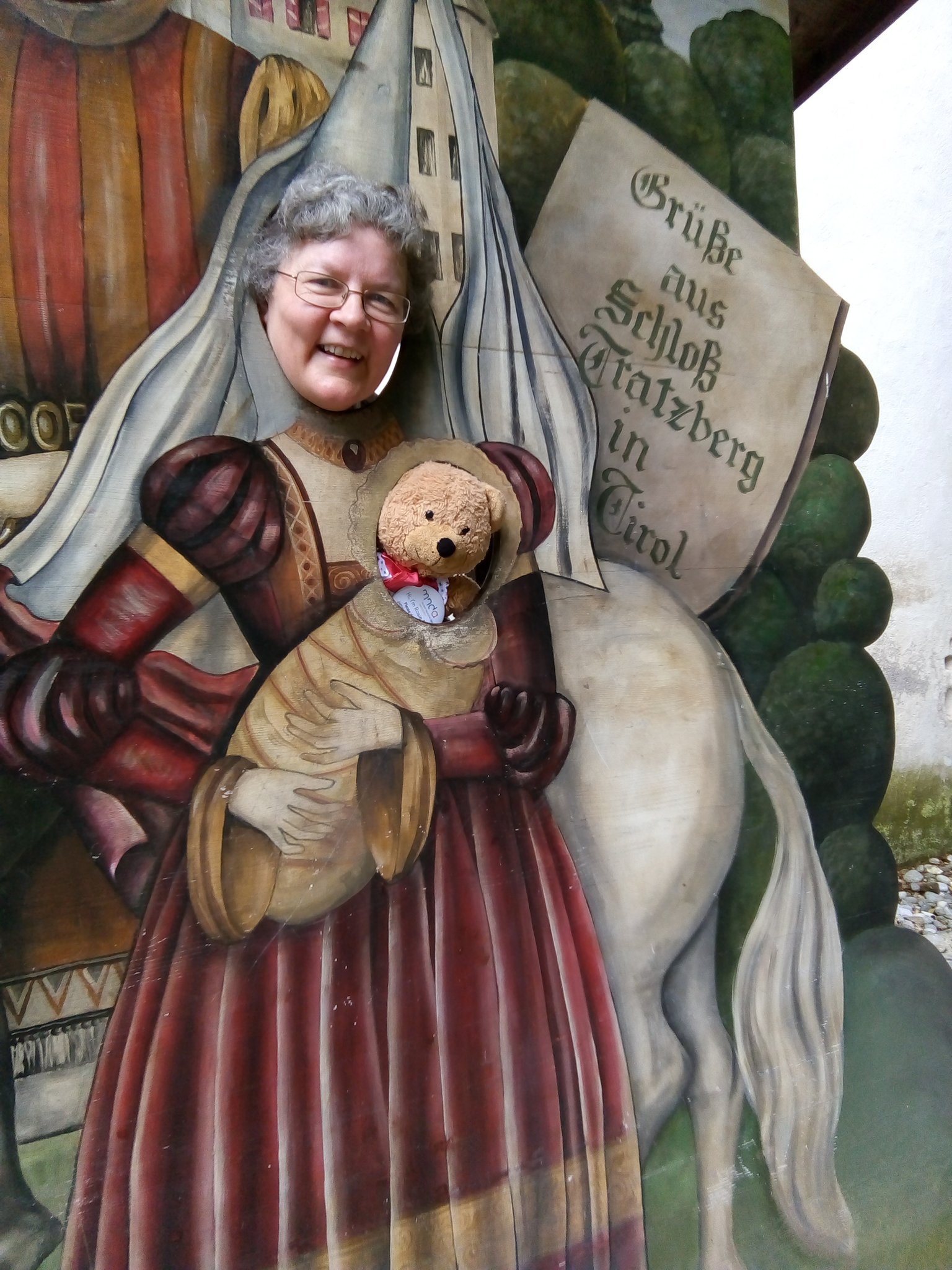 After a delicious lunch we boarded the coach again and were dropped off a Jenback station, where there are actually three gauges of track for the different types of train passing through the station.  This time we were going up the mountain on the Achenseebahn, Europe’s oldest steam operated cog railway, which dates back to 1889, which slowly made its way up to Lake Achen, where some decided to go on a boat on the lake and some, like me, went up the mountain in the cable cars to get a superb view over the valley. 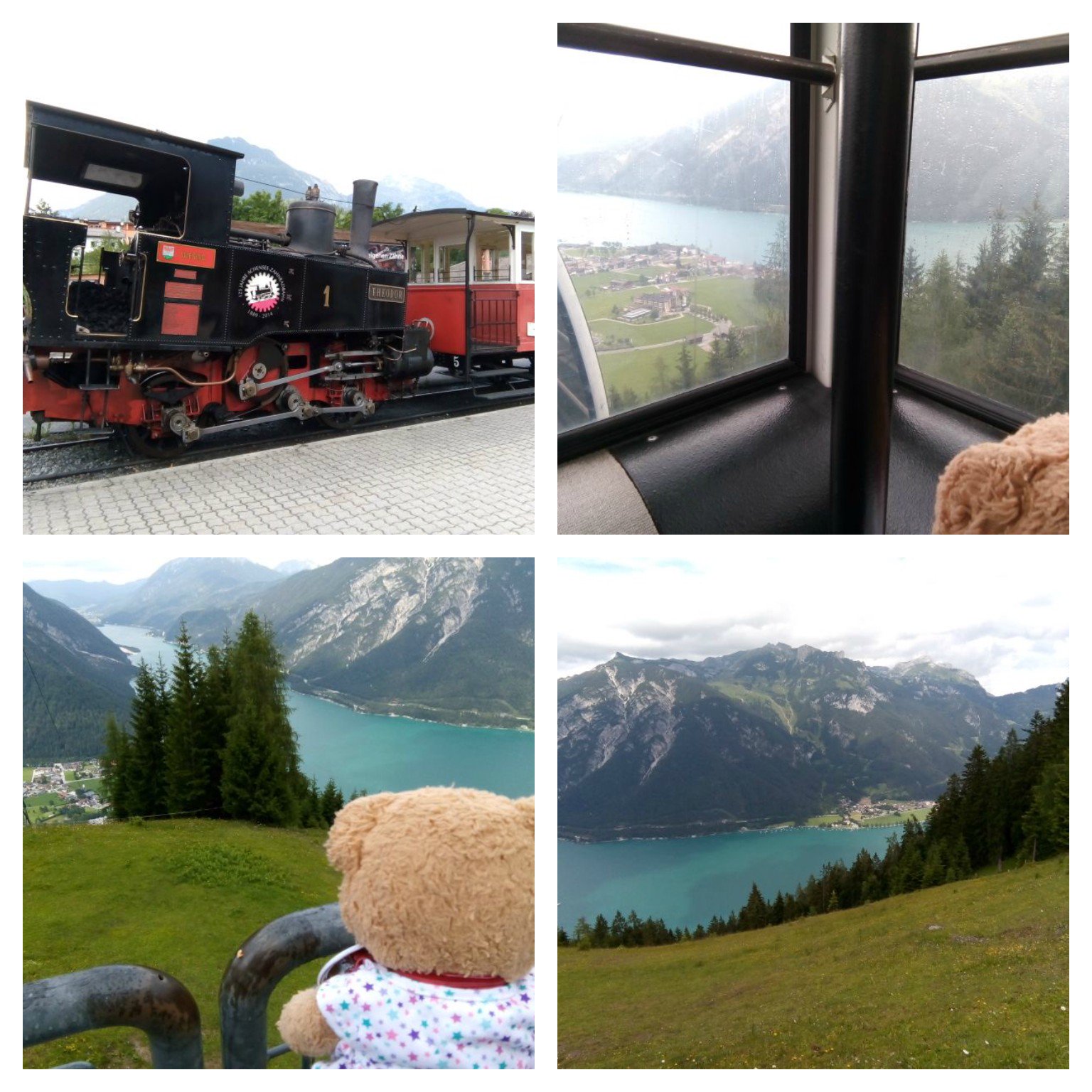 Today we made an early start for the two hour journey to Munich Airport to catch our lunchtime British Airways plane home, followed by a National Express coach back to Poole, arriving just after 6.30 in the evening.

It had been a packed holiday with lots of places to see and trains to travel on.  It was definitely well worth the money but it was nice to be home.

Knowing a friend was showing his classic Riva motor boat down at the show, I decided to pop down and have a look to see what was going on.  It’s actually quite a busy show with lots of boats on the pontoons at the Quay with displays of all things boat/water sport related ranging from clothing to a massive Sunseeker and everything in between, together with demos in the harbour plus racing, dinghy sailing to mention just a few, finishing the evening with a fireworks display, not to forgetting the numerous food outlets and live music.

Luckily the sun came out and I managed to hop aboard some of the boats for a photo.  My, some of them are really posh!

On the way out I came across the Sunseeker stand, where they were taking people’s photos, so we popped in for a quick snap – that’s the closest we’re going to get to a Sunseeker!  (and yes, as you can see from  Isabel’s face, it was starting to get hot, plus she’d had a g&t on board ‘Calypso’!  On the quayside I found this massive deckchair and I just had to have a try in it and tweet the photo #POOLEBOATSHOW, finally I popped in to the Poole Tourism stall, picked up some leaflets and said hi to the nice lady there.

I could have stayed a lot longer but had somewhere I had to be, so that was the end of today’s adventure but it’s definitely worth bearing in mind for a visit next year.

Another fun evening ahead of us at our local theatre, the Tivoli in Wimborne.  This time it’s the multi-talented and irrepressible Brian Conley.  I took my seat early, as you can see from the photo below! 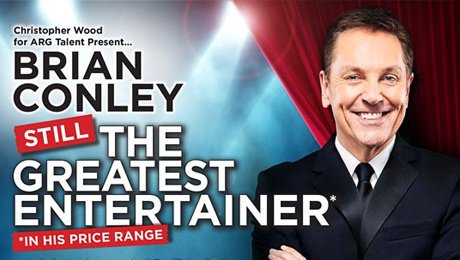 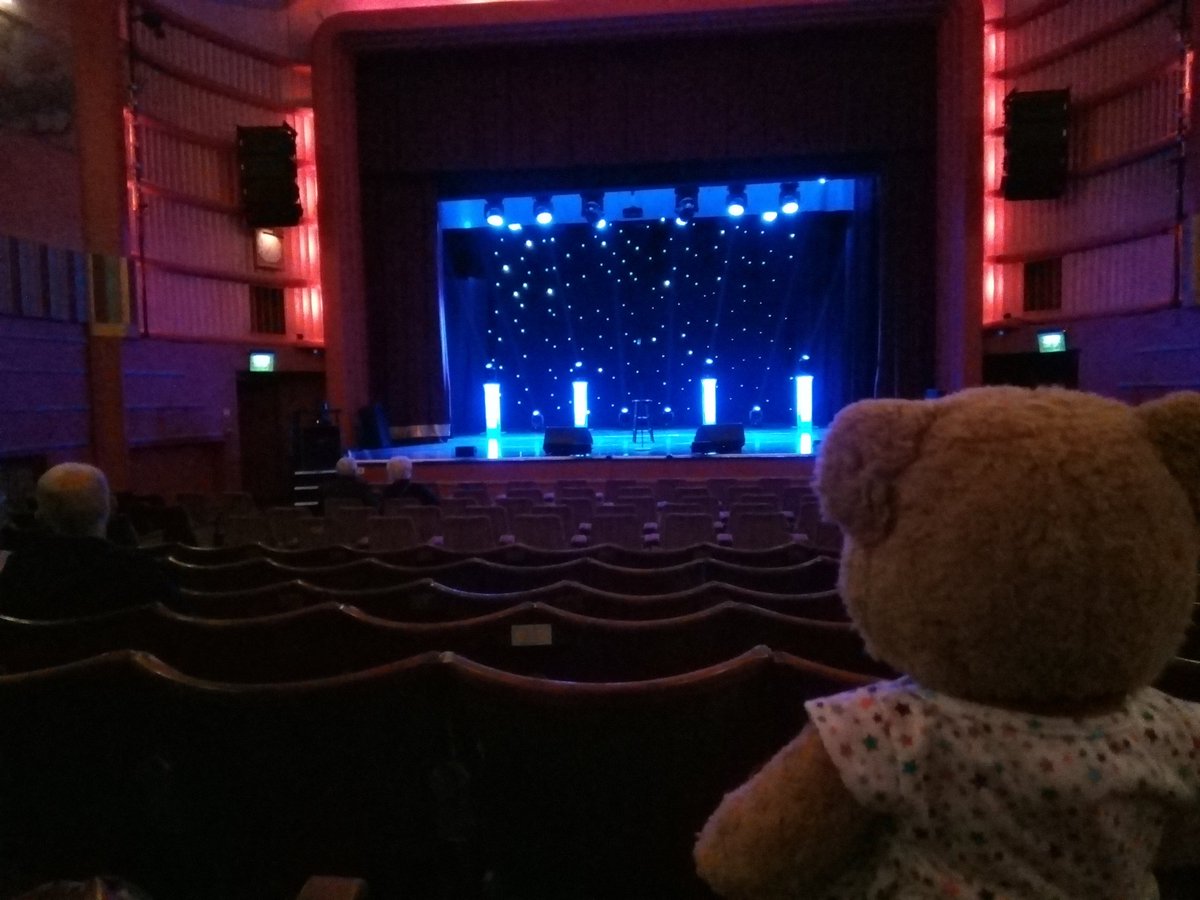 We weren’t disappointed.  The show was a mix of jokes, tomfoolery, anecdotes and songs from his West End appearances, which showed his versatility – Al Jolson from ‘Jolson’ (for which he was nominated for a Laurence Olivier award), Caractacus Potts from ‘Chitty Chitty Bang Bang’, Fagin from ‘Oliver’, Edna Turnblad from ‘Hairspray’, P T Barnum from  ‘Barnum’ to name but a few!  Brian actually has a lovely singing voice and I’d love to see more of him in the West End, which combines all his talents: comedy, singing and acting but it must be a big commitment for a family man.

Brian is a real showman and loves to interact with the audience, I’m glad I didn’t sit in the front row or else you might have seen a rather flustered teddy bear on stage!  Emma and Ryan and their families really joined in the fun, though!

Brian’s support act was Mat Ricardo, the gentleman juggler who was dressed in a rather dashing suit, another multi-talented performer – not only did he whip a tablecloth off a loaded table, he put it back again with comedy thrown in too!  I do love traditional variety acts, Mat also juggled hats, items of different shapes and weights, balanced things on his nose, to mention a few.

Dangerous Brian made an appearance along with his most famous catchphrase ‘it’s a puppet’!  Both Rosemary and Stan used to enjoy ‘The Brian Conley Show and in these times of reality TV it’s a joy to get back to good old fashioned talent!

Thanks Brian for a great evening – all I missed out on was a photo opportunity!